To the west of the Paradise Rescued there is a vineyard and further west from that the old farmhouse and the hamlet of Hourcat. On a summer’s evening as the sun drops behind the hamlet, the vineyard and view from the property is something special. Paradise! 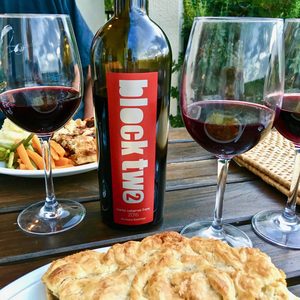 The vineyard had a tough start into the Paradise Rescued family. Because of its location, land and planning zoning, it had always been on the wish list to be part of the family and protected from development. It clearly had great vineyard potential.

Thankfully, the then owners also did not wish to see the vineyard pulled up and turned into housing. But some of the economic realities of the wine world were biting as the world economy crashed in 2009. The owners were left with a vineyard and no-one to rent it too. They so called “cut the vines to death” to prevent them growing out of control and spreading disease when unmanaged for a whole season.

In 2010, the 55+ year old vineyard went without care and rapidly fell in sad disrepair.

In mid January 2011, its owners offered the vineyard property for sale. In early April, a contract was signed providing immediate access to team paradise Rescued to take over management of the vineyard ahead of the sale contract in order to rescue as much as possible.

Following a devastating frost in 1956, the vineyard was replanted with a bottom one third in merlot and the top two thirds in Sémillion. In short, the Merlot was recovered – this is today the so-called Merlot “Old Vine block” but the Sémillion was lost and had to be dug. After fallowing and soil preparation, the new section of Merlot was planted in 2014.

The resilient old merlot vines were steadily nursed back into good health and today form the backbone of the merlot wine and our BlockTwo wines. 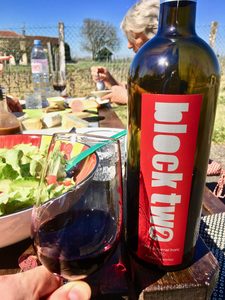 But the story from recovery job to award winning Merlot CabFranc blend had another twist. The initial quality of merlot wine produced in 2012 was very small but enough for one barrel and many more litres left over in vat. In early 2014, as the 2012 wines were being blended and prepared for bottling and the 2013 wine was replacing them in the barrels, the vat matured 2012 merlot was blended with the left over 2013 Cabernet Franc. That cross vintage blend is not permitted under the Bordeaux Appellation laws and hence the  Merlot Cab Franc ‘blend’ became known as “Commercial Accident” allowing for market testing. The test wine was so popular that it set the template for the popular award winning BlockTwo wine that we produce today.