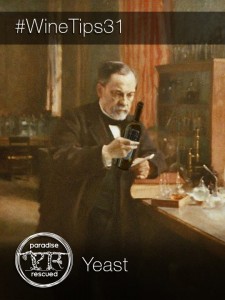 Yeast is the reason why sugars in grape juice ferment to produce alcohol and wine. Although unexplained until studied by French scientist Louis Pasteur in the mid 19th century, its existence and worth has been around since man started the process of civilisation.

In the wine making process, we can use either naturally occurring yeasts that live and multiply in the vineyard year after year or alternatively synthetically produced versions.

Wild yeast fermentations that start naturally and are not inoculated with synthetic yeast can often produce very specific attractive aromas to a wine. Natural yeast strains can be encouraged in a vineyard by composting the residual skins and seeds (so called ‘marc’) back into the vineyard after running off and pressing the solids. There are some risks in using natural yeast with the potential for unpredictable off flavours and a “stuck fermentation” where the yeast is not vigorous enough to complete the fermentation.

Synthetic yeasts can be relied on to deliver a reliable fermentation, using all the available sugars, blocking out wild rogue yeasts and preventing less undesirable poor tasting by-products and vinegars.

Yeasts can work with and without the presence of air and oxygen. At different times during the fermentation process, it is good to have an excess of oxygen achieved by aeration and pumping over the fermenting juice in the vat. At other times such as malolactic fermentation and barrel maturation, the yeast will continue to work without oxygen. As yeasts die off they fall out of the wine and form deposits called lees. During red wine barrel maturation processes, the remaining yeast lees are often stirred up and re-mixed with the wine during a process called “batonnage” to provide additional flavours.