Two super busy wonderful weeks in Europe are over, including 9 days in beautiful Cardan. I have to laugh when people ask me how the “holiday” went!! What holiday are we referring to? Every day in paradise is a pleasure when you are doing something in which you passionately believe in and enjoy! Naturally I can’t wait to be  back….the sooner the better!

The first week of April was spring in many ways. Summer time daylight saving started, the endless rain gave way to some warm sunshine as the temperatures pushed up into the 20s and the vines began to grow again.

We talked in our previous blog about our improvement plans and ideas for 2014. Time to get some action happening….. As the vines have wintered sleepily, we held off from pruning as long as we could to prevent kick starting them into action too early and risk losing buds during a late frost. So far so good and fingers crossed! The Merlots and the first couple of rows of Cabernet Franc have already burst their buds and the initial leaves are showing. As the sunshine and warmth gain momentum, it won’t be long before all the vines have their leaves and we can tie down the double guyot canes and let the new shoots power upwards. 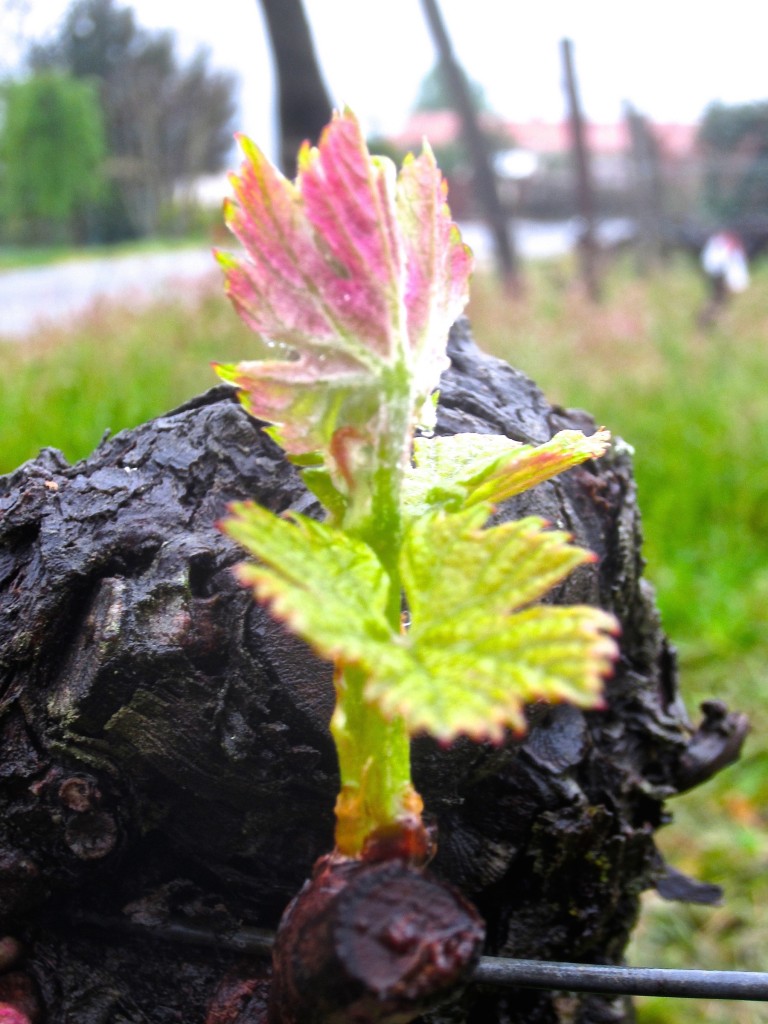 Bud burst from the trunk of an old Merlot vine

Other work is underway. Our first ever biodynamic plant tonic has been sprayed onto the vines to help them get the best and most vigorous start to the season. In between the rows, every other space has already been harrowed and more recently the other gaps have had their first pass with the shredder to cut the grass and mulch the vine prunings. The soil underneath each row of vines will be ploughed and opened up as we continue the programme of soil management we initiated in mid 2013. This also (further) removes the need for any weed chemical killing or removal, which is banned under our organic viticulture practice. The gaps in the rows, where dead vines were removed, have been identified and flagged ready for replanting with new vines in the coming weeks.

The goal is very simple: we want to make this one of the best maintained healthy and organic / biodynamic managed micro vineyards in Bordeaux. Only if we produce the best fruit, can we make some of the best Cabernet Franc wine. In short, we are taking our viticulture to the next level. The team is ready, together with our supporters helpers and contractors, we have a clear plan. Bring on the sunshine, light and action! Season 2014 is all GO![/fusion_builder_column][/fusion_builder_row][/fusion_builder_container]