The heat is (full) on in Bordeaux

Europe is having a (really) hot summer. Tragic fires have torched parts of Greece. Many parts of southern Europe are starting to resemble Australia in prolonged heat and temperature. The global warm-up continues. And in the vineyards? The heat is (full) on in Bordeaux! 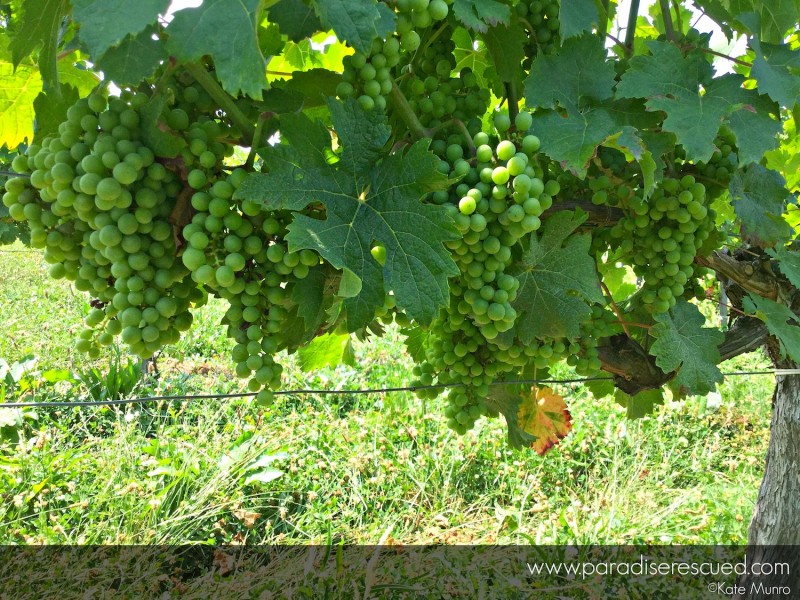 2018 is shaping up as a year of incredible contrast. In the vineyards of Bordeaux vineyards, it’s hard to believe that we are in the same season or year. After a cold wet late start to the season, followed by more incessant rain and a complete lack of sunshine and light, the situation has reversed completely on its head. In Bordeaux, the rain stopped and the sun dialled up the heat.

Back in late March, I spent a good number hours assisting our vigneronne Pascale in the new Paradise Rescued Merlot vineyard to finalise the pruning and tying down of the new vines. It rained every day and there was almost continually water beneath our boots as we worked the vineyard and developed the plan for the season. Any soil work that required a tractor had to be postponed for fear of bogging the tractor in the middle of the vineyard. Even a horse would not have been able to turn the wet clay soil.

As the young shoots started to burst and grow, the focus turned quickly to protecting the vines from fungal disease – mildew and black rot – caused by heavy levels of humidity. The water was everywhere. When we thoughts things could only get better, warmer and drier, it rained again. And the organic micro-treatment war against disease prevention intensified.

And then the July heat began! Rather than a nice steady warm-up with reasonable heat to progress the vineyard development, it all went to the other extreme. The heat has come full-on. The combination of wet soil and high heat caused a massive growth spurt in the vines, required daily attention to either corral the vines or cut back their excessive growth.

But worse still, intense heat and high temperatures temps create growth but stop the season progression of the vines. In particular this means that the véraison (skin colour change) has been partially halted as the vines preserve their energy against the incessant heat, waiting for a cool change or some rain to initiate the process. And until the colour change happens, the vines remain vulnerable to further attack by mildew. With heaps of residual moisture in the soil, early morning mists have been common – simply exacerbating the disease risk.

Frequently the month of August is a holiday month for vignerons, when the vines can simply go about their transition to ripening without any intervention or work. Bordeaux 2017 will be a vigneron’s vintage. If you aren’t working your vineyard through this summer heat, your fruit and final wine will most likely be impacted.

At Paradise Rescued, hands-on control, checks and pruning to each vine will continue until stability is achieved. All effected fruit is removed by hand and the fruit load on each vine carefully monitored to minimise excess stress – particularly on the young vines. Every vine and its precious fruit is continually monitored by Pascale and the vineyard team as they work with Mother Nature to deliver another successful harvest.

The other impact of the high heat and long light days is to accelerate the ripening and bring forward the harvest date. For the moment the heat is full on in the Bordeaux vineyards.