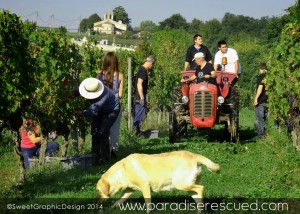 As a growing season, 2014 started well. The winter was very wet and generally mild so the vines got off to an early start with bud burst around mid to late March. April was warm, dry and sunny, May cooler with some rain and the vines maintained their early pace, tracking two or more weeks ahead of the normal development curve.

June was warm and humid creating huge mildew pressure, although flowering was generally rapid and early. But towards the end of the month and into July, the vintage headed into difficulties. Continued high humidity led to numerous thunderstorms with occasional hail showers. Locally the town of Paillet was submerged in 2 metres of flood water following a massive rain deluge during the afternoon of July 25th. Summer never really returned in August and the advantage of an early start to the season seemed to have been almost totally lost. 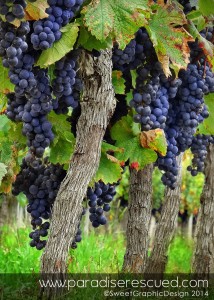 However as the last weeks of the season arrived, September delivered an Indian summer of dry sunshine, which helped restore some ripeness into the grapes. As the threat of grey rot rolled into the vineyards, due to the humidity in the ground from the heavy summer rains, we choose not to risk losing the fruit by hanging on and hoping for continued dry weather. The Merlot was harvested on September 27th and the Cabernet Franc one week later on October 4th.

We produced one barrique barrel of Merlot and three of Cabernet Franc. The wines are generally light with elegant fruit flavour. Internal and external tasting confirms that the quality is very good. Further oak maturation will confirm in due course.