It’s getting to that quiet time of the year. In the vineyard, the beautiful autumn colours indicate the vines are starting to relax after a tough season. Pruning will not start for a few weeks yet, when the sap has retreated down into the root system. In the winery, the secondary malolactic fermentations have finished in both vats and we are preparing to run the young wine off into barrels for maturation. By about January, we should have an idea of the potential of vintage 2012. Exciting!

So while it is quiet, I thought I would share a brilliant piece from Lou Tice at the Pacific Institute on the subject of frustration. So often I come across people who tell me that they have tried something once or maybe twice and it didn’t work out so they gave up in frustration. If that sounds like you, then read on….

“Everyone gets frustrated from time to time, but, depending on how you handle it, frustration can stop you in your tracks or move you forward to success. Let me tell you a story that illustrates my point. (You may have heard this story, but it bears repeating today.) There’s this little company called Federal Express started by a guy named Fred Smith, who built the company, almost literally, out of frustration.

When Fred started FedEx, he financed it with every dime he had and hoped to deliver 150 packages a day. He delivered 16 that first day – five of which went to the home of an employee.

For a while, the staff wasn’t sure if their paychecks would bounce or not, and many times the company planes were nearly repossessed. Sometimes they had to bring in a certain amount of business during a day to keep the doors open the next day. 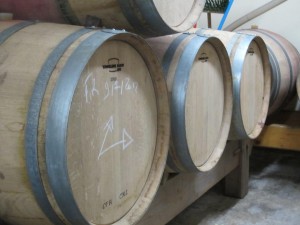 In the winery – barrels, clean and waiting for the young wine.

Today, FedEx is a billion-dollar company, but the only reason it exists is because Fred Smith could handle frustration after frustration. In fact, I can’t think of any worthwhile endeavor that doesn’t involve some frustration. And, the more you can handle, the bigger your eventual gain is likely to be.

If you remember that every setback is an opportunity to learn and grow, and you behave accordingly, you’ll be miles ahead on the road to your personal picture of success.”

A Bordeaux Glass: well more than half full!