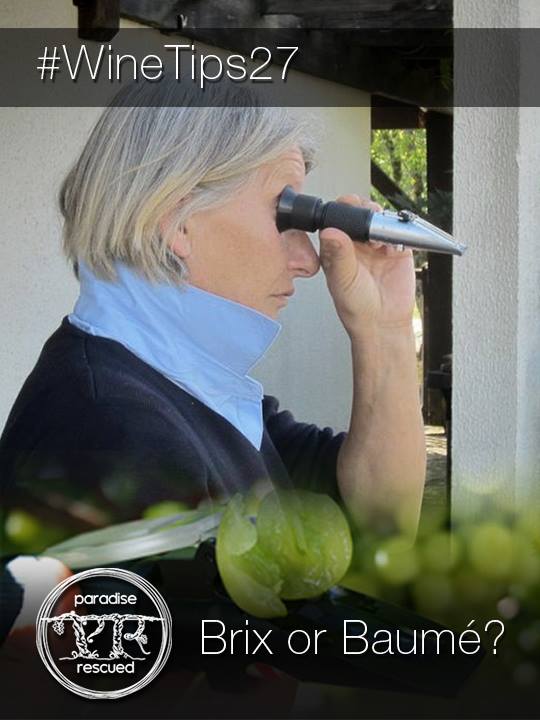 Using a refractometer to assess the sugar content of grape juice

Brix and Baumé are two different ways to assess the relative concentration of sugar in grape juice for wine making.

The Baumé scale was developed by French pharmacist Antoine Baumé in 1768.  Recorded as degrees Baumé or B°, it is actually two scales of measurement for the relative density of a liquid to pure water (defined as Zero B°) – one scale for liquids of higher density than water and another for less dense liquids. Typically Baumé is used by French winemakers as their measure of assessing the ripeness of grapes prior to harvesting and subsequently as juice prior to fermentation. The Baumé reading of grape juice gives a reasonable prediction of the likely alcohol content of the resulting wine.The Brix scale was pioneered in Germany by Karl Balling and subsequently Adolf Brix in the early 1800’s and measures the strength of a sugar solution with each degree °Bx representing one gram of sucrose in 100 grams of solution or 1% sugar in juice. It is more widely used across the world as the measure of sweetness of grape juice.

Using Brix or Baumé measurements is only an approximate indication of sugar content as grape juice contains a lot more than just water and sucrose! Specific gravity testing of the fermenting must is carried out on a regular basis to assess the progress and termination of the of the fermentation process. And again, whilst the Brix or Baumé analyses of unfermented grape juice can lead to a reasonable indication of final alcohol level of a wine, it is only a guide.

In the vineyard, vignerons frequently use hand held refractometers to get a simple idea of the ripeness and sugar levels of their grapes in different parts of their vineyards in order to determine – along with other factors – the optimum and appropriate time to harvest.

As both scales are density measurements, conversion tables and formula are available to convert between the two scales.